“The most dangerous weapon of mass destruction is child abuse. And, we are all responsible . . . in order to stop the violence, we need to expand our understanding of child abuse.”  — Linda Redford

There is a very wide spectrum of what is considered child abuse in America today. This spectrum ranges from the most violent and horrendous of crimes against another human being on one end, to anything that negatively impacts the sense of inherent goodness and value in a child on the other. Honor Kids International acknowledges the entire spectrum of child abuse, and asserts that any form of degradation to or objectification of a child—big or small, intentional or not, illegal or legal—can be considered abuse.[1]

THE IMPACT
Child abuse affects the child, the family, the community, and society. Just as a drop of water ripples out to the furthest ends of the ocean, so too does one act of child abuse reach the far corners of each community. Here are some of the ways that it impacts us.

THE INDIVIDUAL—In her practice, our founder, Linda Redford, found that people who have been abused as children suffer primarily from, what Indigenous people call, a Spiritual Malady, or a disconnection from the animating principle or the vital essence of life. When one is disconnected from this spontaneous and life-giving source, the separation is experienced psychologically as death. A spiritual malady is a progressive dis-ease that often manifests in the forms of aggressive and compulsive behavior. Aggression (as in violence) or Compulsion (as in addiction) both serve as substitute forms of connection, attempts towards re-connection. Although these substitute forms of connection disempower rather than empower a person, human beings are social animals and our need for connection is vital; it drives our most sane – or insane – behaviors.

How does a Spiritual Malady develop? The origin of spiritual maladies can be traced to what Redford’s daughter, Anne, coined as: Infected Belief Systems (IBS), which are complex and personal reactions to overwhelming experiences that impair the mental, emotional, and physical functioning of a person. IBS is experienced:

If IBS are left untreated, this attack on the Self leaves one feeling powerless and disconnected, a traumatic human condition that motivates many manifestations of aggressive and compulsive behavior.

THE SOCIETY — According to the Centers for Disease Control and Prevention (2014), “The total lifetime estimated financial costs associated with just one year of confirmed cases of child maltreatment (physical abuse, sexual abuse, psychological abuse and neglect) is approximately $124 billion.” This includes:

These findings align with the major Adverse Childhood Experiences (ACEs) public health study, which, according to the CDC, found “a graded dose-response relationship between ACEs and negative health and well-being outcomes across the life course… A graded dose-response means that as the dose of the stressor (the ACE) increases the intensity of the outcome also increases.” As the number of ACEs increases so does the risk for the following: 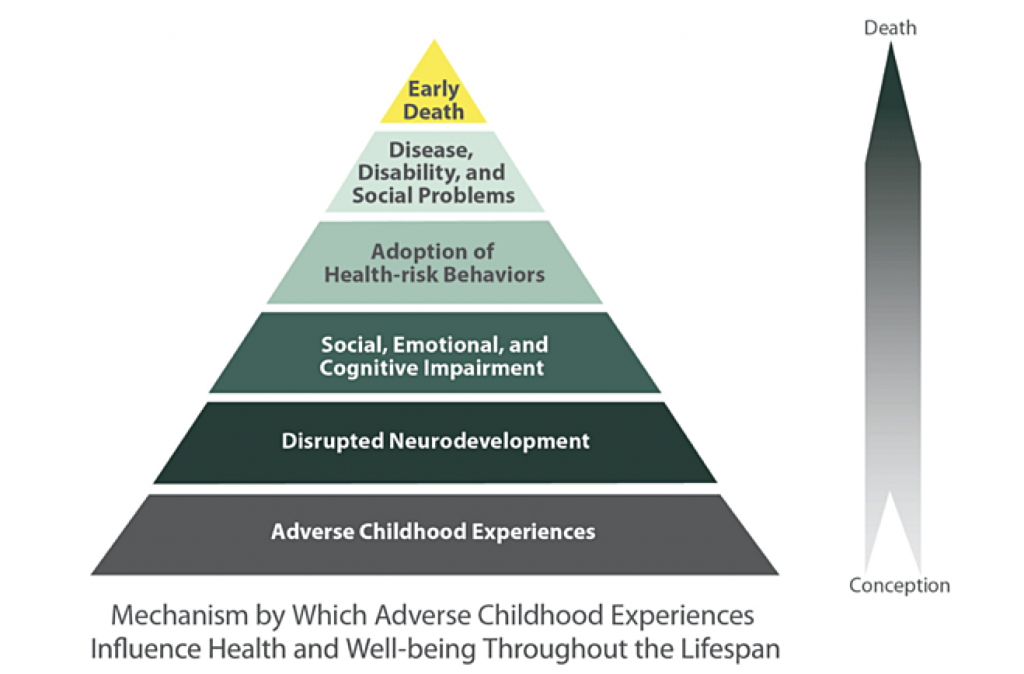 Thus, child abuse not only impacts the individual and family suffering from it, but it effects our communities and society as a whole.

“No problem can be solved from the same level of consciousness that created it.” — Albert Einstein

Child abuse is a pattern that is passed down fluidly from generation to generation, as is the trauma it generates. This is called intergenerational transmission of abuse, violence, and trauma. Its transmission tends to occur when the same consciousness and patterns are perpetuated without interruption or reeducation; history repeats itself when child abuse is legitimized, justified, or normalized by parents, family members, community members, and society at large.

The child abusing consciousness is built upon punitive perspectives, which suggest that punishment—which induces fear and shame—is an appropriate remedy to a problem. This perspective is in and of itself an Infected Belief System, as it is rooted in fear and shame, and separates and disconnects an individual from their counterparts and their inherent goodness. This punitive perspective can be found not only within families, but also in schools, educational systems, governmental bureaus, law enforcement and social service agencies, and penal systems. If we are to truly disrupt and change the occurrence and prevalence of child abuse in our communities, however, we must change the perspective that punishment is the answer.

Instead, we must adopt a different perspective, a new approach, and a new solution. We must adopt a language and culture of Peace. (See: The Solution.)

[1] We are also not suggesting that all forms of child abuse be criminalized; not at all. We believe that recognition of the fact of widespread abuse offers a systemic acknowledgment that is often absent. We are calling it what it is. In so doing, we are also inviting creative solutions and remedies to this massive issue.

References:
About the CDC-Kaiser ACE Study. (2016). Retrieved April 25, 2016, from http://www.cdc.gov/violenceprevention/acestudy/about.html

“A culture of peace requires a language of peace.”

• THE ADAWEE PLEDGE (Guide of Dignity) is an 8 1/2" x 11" suitable-for-framing image with The Adawee Pledge. Download the file, print it from your printer and frame it in a standard 8 1/2" x 11" frame to be used for your daily affirmations.