A signed petition requesting that President Clinton designate a day in recognition of Native Americans and a documentary film in process intended for public schools were the result of the recent  Raoul Wallenberg Institute of Ethics fourth annual Peace and Justice Conference at the Malibu Jewish Center & Synagogue.

The theme of the three-day conference was “The Indian Genocide: Seeking Solutions to Heal America’s Secret Shame.” The ideas for the petition and filming were developed by conference  coordinator Linda Redford, founder of a non-profit organization called Honor Kids International. According to Redford, “My mother was a Native American from Missouri who lived under miserable conditions, and died believing that she was an ignorant, worthless Indian. I don’t want another generation of children  from any background ever feeling that way about themselves again. The healing must begin.”

Highlights of the conference included ….Bonnie Duran, a Native American Professor of Public Health at the University of New Mexico and a featured speaker….Max Gail of “Barney Miller” fame went  over big with his original songs reflecting the conference theme…and Beth Sullivan, producer of the T.V. show “Dr. Quinn: Medicine Woman,” spoke about her difficulties in airing an episode about an Indian massacre.

Filmmaker Gary Rhine said, “We hope students around the country will see this documentary and understand the truth about the ‘American Holocaust.’ And we also hope that people will be encouraged to conduct more of these meetings. 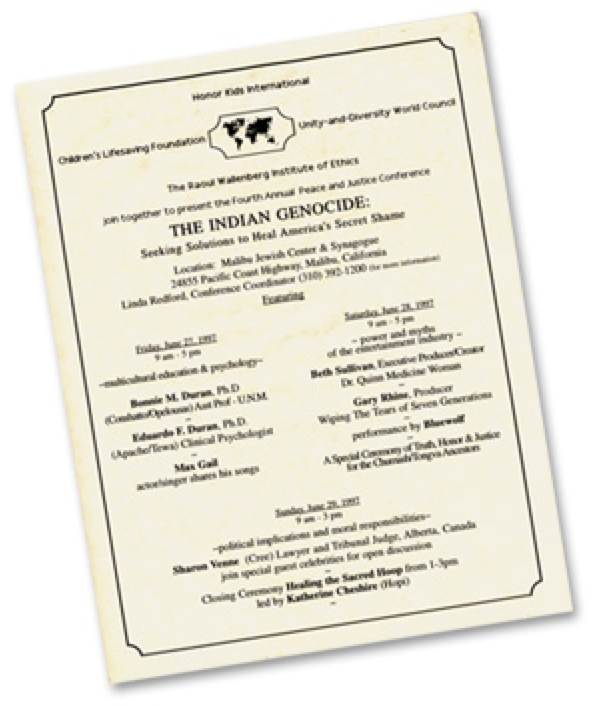 “A culture of peace requires a language of peace.”

• THE ADAWEE PLEDGE (Guide of Dignity) is an 8 1/2" x 11" suitable-for-framing image with The Adawee Pledge. Download the file, print it from your printer and frame it in a standard 8 1/2" x 11" frame to be used for your daily affirmations.